While Wesfarmers’ workforce is made up of 54 per cent women and 46 per cent men, a key opportunity for the Group is to increase the percentage of leadership positions held by women.

Women hold 47 per cent of salaried roles and 56 per cent of award or enterprise bargaining agreement (EBA) roles. 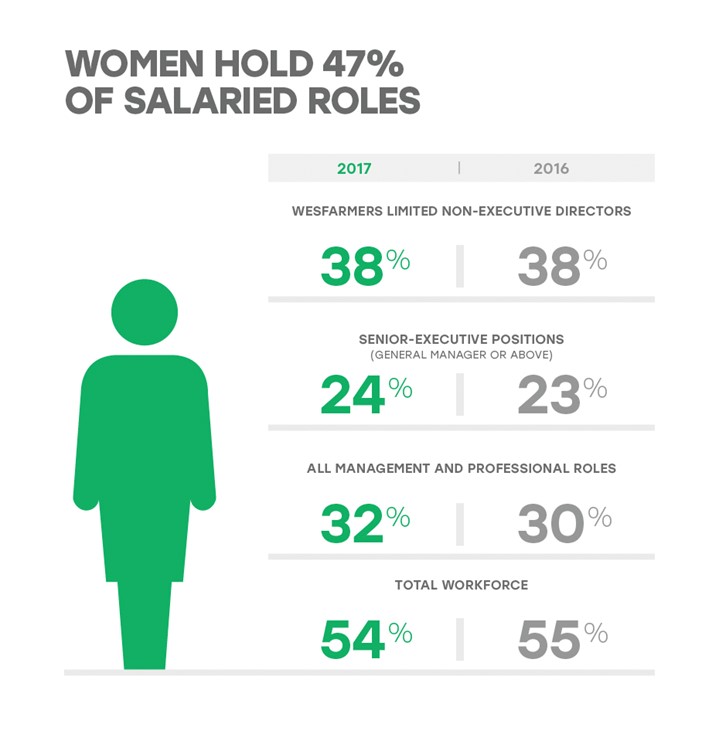 The Wesfarmers Diversity Policy outlines four core objectives which are used to measure performance in this area. The objectives are reviewed annually by the Board, as well as Wesfarmers’ progress in achieving these objectives. Specific progress targets are linked to senior executive key performance objectives under the incentive plan. Given the diversity of the Wesfarmers portfolio, each division has developed its own gender balance plan in line with the Group objectives.

The four objectives and indications of progress achieved for all roles at manager level and above are outlined below.

Foster an inclusive culture: This objective seeks to leverage each individual's unique skills, background, and perspectives.

In 2017, the Wesfarmers leadership model was updated to ensure that our leaders seek to “bring out the best in a diverse range of people” and “lead collaboratively across diverse networks and teams”. Understanding the different strengths and perspectives that individuals bring to our divisions leads to teams that are more engaged and higher performing. In 2017 Wesfarmers and our divisions invested in a number of town hall sessions across the Group by leading gender experts to build awareness about leveraging the economic benefits of gender balance. In addition, forums have been conducted for best practice sharing across the Group and several of our divisions conducted listen and learn sessions with female leaders and team members.

Our divisions continue to introduce and embed practices to improve access to childcare, better manage team members on parental leave, and improve take-up of flexible work arrangements. A number of our positions – from those in the executive teams to those in our stores – are filled by team members who job share or work flexibly.

We recognise the importance of increasing flexibility at senior levels for both males and females. Of all employees at a manager level or above, 90 per cent of employees expected to return from parental
leave during the year ended 30 June 2017 returned on either a full-time or part-time basis (2016: 85 per cent).

Developing the leadership capabilities of our female and male talent so that we can have more gender balanced teams at all levels of seniority and across all functional areas, is a priority for Wesfarmers.

Over the 12 months to 30 June 2017, the overall number of women in manager or above roles increased from 30 per cent to 32 per cent. This increase was reflected across various levels of management, including general manager and manager levels, with only the senior manager level experiencing a slight decline in the representation of women managers. 26.5 per cent of all nominated successors to leadership positions across Wesfarmers and its divisions are female.

Female employees represented 33 per cent of all internal promotions at manager level or above, falling slightly from 35 per cent during the previous year.

The Group Managing Director meets twice a year with each division to discuss succession plans and the pipelines of high-potential leaders and ways to ensure divisions are successfully attracting, retaining, and promoting current and future female leaders.

Women continue to comprise 28 per cent of the divisional leadership team succession pipeline population (roles that report directly to a divisional Managing Director).

Enhance recruitment practices: This objective is a commitment to hiring the best person for the job, which requires consideration of a broad and diverse talent pool.

Wesfarmers seeks to tap into 100 per cent of the available talent pool for any given role or function. Several of our divisions have put in place structured hiring processes to ensure diversity in recruiting. For instance, through the “hiring for leadership” process, Officeworks mitigates the risk of bias by including a balanced hiring panel.

Ensure pay equity: This objective aims to ensure equal pay for equal work across our workforce.

Since 2010, a Group review of gender pay equity has been conducted annually, with results reviewed by the Board and divisional Managing Directors. Over this period the company has aggressively moved to close any pay equity gaps. For Australian salaried employees Wesfarmers has been able to maintain the pay gap at all managerial levels of the organisation to five per cent with the exception of the General Manager level which stands at 8.1 per cent. Any apparent gaps are analysed to ensure such gaps can be explained with reference to market forces which may include, for example, different rates of pay in different industries, location, the relative supply and demand for different qualifications, individual performance and experience.

Every year, Wesfarmers businesses lodge their annual compliance reports with the Workplace Gender Equality Agency (WGEA). A copy of these reports may be obtained via the WGEA website here.

Wesfarmers is a signatory to the United Nations Women’s Empowerment Principles. Our support of the principles is consistent with our ongoing commitment to gender diversity and aligned to the work we are currently doing across the Group.

More than 4,000 Indigenous team members employed Our vision for reconciliation is an Australia that affords equal opportunities to all. Wesfarmers aims to ensure that Indigenous people feel welcome in our businesses as employees, customers, suppliers and visitors. We will know that we have succeeded when we have a workplace that reflects the diversity of the communities we serve. Wesfarmers produced its first public Reconciliation Action Plan (RAP) in 2009, with a focus on ‘Relationships, Respect, and Opportunities’. Our RAP outlines specific measurable actions undertaken across the Group, targeting Indigenous employment, business engagement, community partnerships and team member volunteering with Indigenous organisations. The RAP is registered with Reconciliation Australia. This year, we made progress across all areas of our RAP, with the following highlights: Indigenous employment  As Australia’s largest private sector employer, we believe we are able to provide Indigenous people with greater opportunities to participate in sustainable employment, and this remains the primary focus of our RAP. At 30 June 2017, Wesfarmers had 4,231 Indigenous team members, representing two percent of our current Australian workforce. This is a 27 per cent increase on the previous year. Business Unit 2017 2016  2015 2014 2013 Coles 2,872 2,318  1,765 862 640 Bunnings 516 423  410 336 176 Kmart 429 333  278 279 270 Target 155 136  161 107 86 Officeworks 161 65  73 67 54 WesCEF 29 19  17 13 15 WIS 50 131 35 28 37 Resources 17 19  20 18 22 Insurance NR NR  NR NR NR Corporate 2 1  3 1 2 Group total 4,231 3,3271 2,762 1,711 1,302 NR means data was not recorded due to the sale of the Insurance division in 20141This number has been restated due to a review which was conducted in 2017. Our businesses continue to offer full-time and school-based traineeship programs and our corporate office employed an Indigenous cadet during the year. Wesfarmers retailers engage Goldfields Indigenous communities In 2017, our Kalgoorlie-based retailers engaged with Indigenous communities across the Goldfields region, and some initiatives included: Bunnings and Kmart provided care packs during a community visit by store team members to Laverton. Coles ran its First Steps pre-employment training program resulting in seven new team members being employed at two Kalgoorlie Coles supermarkets, a Liquorland and Coles Express. As part of our commitment to regional and remote areas, in March 2017 Bunnings, Target, Coles and Kmart team members from their Kalgoorlie stores travelled to Leonora, two and a half hours north of Kalgoorlie for a community day. Click here to view a video of the community event. Wesfarmers-led community events have on occasion, resulted in employment opportunities being offered to local Indigenous young people. Indigenous community partnerships Wesfarmers is committed to establishing community partnerships with Indigenous organisations. We have supported the Clontarf Foundation since 2001 and in 2015 agreed to a new, three-year partnership with an increased financial contribution to assist the foundation’s national expansion. Most of our businesses also engaged with Clontarf across Australia during the year. We continued to support the Australian Indigenous Mentoring Experience  and The Graham (Polly) Farmer Foundation. Wesfarmers also entered into the second year of its partnership with Reconciliation WA. Our divisions also have partnerships with organisations that support Indigenous communities, such as Red Dust Role Models, New Start Australia and The Australian Literacy & Numeracy Foundation. We also contributed to the Centre for Independent Studies ‘Prosperity Project’ research program, which is looking at funding for Indigenous programs and where it is having the greatest impact. Indigenous procurement activities Wesfarmers has committed to increase its procurement from Indigenous suppliers. We are a founding member of Supply Nation, Australia’s leading supplier diversity accreditation organisation. In May 2017, nine representatives from our businesses attended the Supply Nation Connect Indigenous business conference. We were also proud to sponsor the Government Member of the Year Award at the Supply Nation 2017 Supplier Diversity Awards. In the six years to 2016, Wesfarmers procured more than $47 million in products and services from Indigenous suppliers. Our latest RAP report and commitments can be found here.